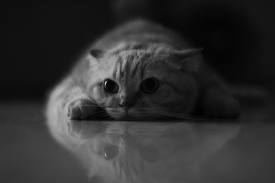 Listen to "Samuel" by The MayTricks (re-sung version and the Geoff-sung original, released on the 1994 album Happy Songs Will Bring You Down).

As I've described before, my band in college featured (from '91-'94) the adventurous jazz guitarist Geoff Esty,
who gave us some cred with his fleet fingers. He's also a songwriter (you can hear/watch his current activities here), but we only played maybe a half dozen of his songs, partly because they were usually complex enough that they took up much more rehearsal time than anyone else's tunes.

One tune he brought in around maybe 1992 was this gorgeous acoustic thing, with a chord progression and melody like a jazz standard, and just devastatingly sad. We felt a little less sorry for Geoff on hearing that this was about his cat, Samuel, which made lyrics such as "biting down on my blanket, his hopes dim." But still, it was obviously a confessional tune, shameless in its nakedness, to the point that it makes one a little uncomfortable. (I've written that kind of thing too, of course.)

Given the isolation depicted, this seemed a good match for our Nozick episode. (Yes, I know that Nozick is only against enforced government non-interference, not against any and all social interactions, and plan to write a blog post on the interaction between this technical version of libertarianism and its overtly anti-social cultural variants.) However, in taking a listen to the recorded version, I was brought back to a point of disagreement from the time:

Another reason we didn't play more of Geoff's songs is that he tended to want to sing them, which, to put it gingerly, did not typically go over well with audiences. For the "Saumel" recording, we first captured Geoff's main guitar and possibly his vocal (I think this was in 1992, as it's on the 4-track tape right after "Green Song.") The layered backing vocal part was what, for this tune, so occupied our time during band rehearsals, so I decided to just record the damn thing entirely by myself to get it out of the way. (Geoff had created that part so that we could essentially imitate his guitar part near the end of the song while he was then playing a guitar solo; we didn't add a second guitar or otherwise do anything else to this live.)

At the same time, I recorded myself singing it, to try to convince Geoff that this would sound better (I and/or Steve had sung lead on a couple of his other songs, so this wasn't unprecedented), but this song was personal enough to him that he wanted to keep his vocal on there: my own lead vocal was deleted when he filled up the fourth track on our 4-track with a second guitar part to thicken things out and add some tasteful, slippery riffs in the chorus and later verses.

In wanting to re-expose the song to the world by putting it at the end of this episode, I found I just couldn't put in on there in its original form, so I just now recorded a new lead vocal (it's amazing how embedded in my brain the song still was; it was a nearly effortless undertaking) and remixed it. Unlike for "Green Song," the original mix for this was already quite good, but I was able to patch up a couple of rhythmic issues and hopefully give the tracks a nice environment to sit in (although I didn't notice until after I was done the rather nice whole-track fade-in at the beginning of the song in the original version, which helps to justify the intro being that long).

So Geoff's vocal got to sit on there for 20 years, and I'm still linking to that version here; hopefully he won't mind my attempting to make this accessible to a wider audience by adding back my own singing. It was certainly fun for me, and I hope you like the tune and give Geoff some long-deserved accolades, like you could go pick up his solo guitar album.