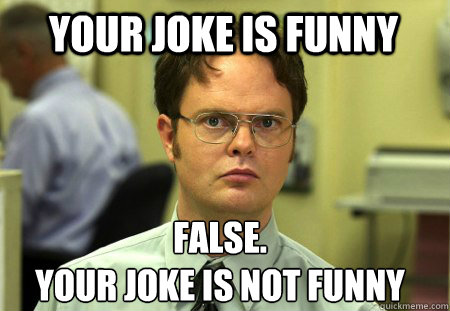 So, yes, my "that asshole" post was pretty puerile. I got a funny idea and felt like people would like it, and many did, but many pointed out in one way or another its lack of philosophical substance. On this point I disagree. Reading through the comments the post elicited and thinking about this further has helped me identify a boatload of relevant philosophical issues. I wrote a comment on Facebook that listed 12, but writing this up today, I've only gotten through #1 (dividing it into a few distinct issues) and feel like that's more than enough to engender some fun discussion here, so I'm going to do this over a series of posts. Or, maybe I'll just get bored and this is all you'll get.

I'm focusing in this post on issues in the philosophy of humor.

The standard range of philosophical theories about what makes things funny can be grossly oversimplified into the distinction between morally bad humor, which is based on a feeling of superiority, and morally permissible humor, which is based on an identification of incongruity, a way of coping with discomfort. People who didn't like the post identified it as being of the first type, lording my superiority over my stupid political opponents. That's not it at all. There are several sources of confusion and discomfort that I'm playing off of here, not least of which is my going crazy because I read the news on my phone several times a day and it's just always more of that asshole, that asshole, that asshole. He is more culturally pervasive by far than Jesus at this point. So my post was a little play fantasy of not having to hear that name anymore. Yes, as stated in the post, this is ressentiment ("punching up"), which is by definition pathetic. It's a wallow in the manner of our episode 156. It's just the kind of thing we need to do periodically to get through these four years.

Incidentally, I think there's an argument to me made that the "superiority" type of humor is also an expression of insecurity, and hence a subdivision of incongruity. The bully derides an "other" just as in Blade Runner, where dissing those distressingly similar to humans helps biological humans feel secure despite those humans' steady loss of genuine humanity.

The Role of Ideology

So I didn't mention above the "that is so true" sort of joke. I think that, as with superiority, there's a good argument to be made that these "observational insight" jokes also are a subdivision of incongruity. What is being pointed out is something absurd or maybe the disconnect is just between the "natural attitude" of experience and the reflection aroused by the comedian's question "Did you ever notice…?"

Whatever the taxonomy, I found the Jordan Klepper clip I referred to funny in part for that reason. We DO use curses in a manner that is surprisingly descriptively specific, so that they're not all interchangeable. Also, talking about "Asshole-Americans" as an oppressed minority group is just funny, whether you're uncomfortable with accusations of "privilege" or disgusted by claims by whites of reverse discrimination.

But while a general joke about an oppressed group that is obviously not oppressed or not a group might be funny to both sides, I'm guessing that most voters for that asshole would not find either Klepper's piece or mine funny. Because political humor inevitably incorporates the "that's so true!" strategy, you generally won't find it funny unless you agree with the political sentiment. By hearing your truth echoed back to you, especially about something that makes you uncomfortable (maybe it's a truth you didn't even want to admit or didn't feel could be talked about publicly, or maybe it's just one that's been bugging you incessantly through every goddamn news story you read, there's a release.

The Aesthetics of Potty Mouth Humor

A subdivision of this feeling that a joke has rubbed you just right for a release has to do with the style in which it is told. I have just the right level of discomfort with the word "asshole" that this meme works for me. If you think it's unfortunate that PEL sometimes includes swearing and think that philosophy, as reflective of the highest ideals of culture, should maintain a certain aesthetic standard, then I understand why you would not find any of that funny.

However, I'm not going to just let you fall back on the inviolability of your aesthetic preferences here. If you've listened to most any of PEL's aesthetics episodes (the best is our first on Danto, with #77 on Santayana coming in at a close second), you'll know about my fetish for aesthetic flexibility: You have the power to (over time and with effort, not just at will) expand your tastes so that you can appreciate more things and hence get more out of life. I most recently talked about this with regard to music (the clearest case of this, and the one most dear to my heart) in my recent appearance on the Dr. Drew podcast.

My general reasoning about music—that the more you listen to, the more you try to understand the motivations and attitudes of its creators, the more you'll appreciate—also works for humor. If you can't listen to most comedians because of all the swearing, get the fuck over it. It's not helping you. It's just needless snobbery. Plenty of foul-mouthed motherfuckers are plenty intelligent. Why do they feel the need to use words like "motherfucker" when they clearly have no semantic role in the preceding sentence? There's probably not a clearly explicable answer, but if you go immerse yourself in a bunch of those comedians for a few afternoons, you'll probably "get it," or at least "get past it."

An especially useful part of this intentional expansion of tastes is that it helps you to understand the styles of being among different groups of people: free-wheeling young Jewish stoner girls (Broad City), 70s Hispanic stoner dudes (Cheech and Chong), and, well, many other demograhics of stoners, whose sensibilities I can now appreciate even though I'm probably OVERLY anti-drug and always have been.

More difficult for me to penetrate through comedy and music are the experiences of oppressed groups, but I’m working on it. So what about conservatives? “Conservative” comedy can mean many things, from the kind of comedy that is simply not surprising or edgy (gentle jokes for elderly folks), to comedy that specifically riffs off of the “redneck” experience, to comedy that actually embraces a conservative ideology, in which case we’re back to issues with the content of conservative values and not just with the aesthetics of language use and “style.” I’m not homophobic enough to find jokes that come out of that insecurity too funny. I’m not going to say “that’s so true!” when hearing Bill Cosby wistfully talk about his pursuit of "Spanish fly" to render women helpless against his sexual advances.

But then again, Bill Burr says a lot of un-PC things that I still find hilarious. I haven't spent enough time with Joe Rogan or Adam Corolla in the last year to know whether I think they're funny, but I have some fond memories of them and acknowledge their talent, so this might be an area I can delve into.

In general, what personal aesthetic expansion provides (at least initially) is a temporary tolerance for the strange, so that you can listen to a rap or metal or EDM or experimental song that you normally wouldn't like, or sit through a particular comedian, and come away with some enjoyment. Would you then WANT to actually listen to one of those podcasters, or Howard Stern, day after day, or introduce "motherfucker"-spouting comics into your everyday routine? Probably not, and much the same as too much weightlifting can injure you, too much experimental immersion too fast might well produce an adverse reaction that will make you want to retreat into the comfortable and familiar forever (i.e., the usual state of many people, but hopefully not of philosophy students).

So I understand that however open-minded our conservative listenership may be, an endlessly dismissive attitude toward libertarians, or moral absolutists, or devout religious folks, or even voters for that asshole, can be just too much. Though this wasn't the case in the first year(s?) of doing the podcast, I very much have this in mind as we record now. We respect you all enough to spend time with thinkers in these traditions (I stress "thinkers," not random idiot pundits, who are really what engenders our annoyance) like Edmund Burke, Robert Nozick, Ayn Rand (yes, she counts as a thinker!), St. Augustine (among many other theologians and conservatives of the past, including curmudgeons like Schopenhauer), Herbert Spencer (coming this winter at some point), Adam Smith (though I claim him as a liberal!), and our ep177 will feature free-market-leaning economist Russ Roberts of Econtalk. If you appreciate our treatment of those figures, have spent enough time with us on the podcast to see the goodness of our hearts and the openness of our minds, then maybe when we have to emit the occasional malapropism, you can give us the benefit of the doubt and try to figure out what philosophical justification might be lurking underneath. Or just let it pass.

Also, I will probably opt to simply not talk about that asshole in most episodes rather than insist that my cohosts use the term "that asshole" as we go forward. I may digitally edit out his name, like put a beep over it or a fart noise. OK, not a fart noise. Your suggestions are welcome.